Bridget Riley is considered Britain’s foremost exponent of Op Art. Riley studied at Goldsmith’s College from 1949 to 1952 and later at the Royal College of Art from 1952-1955. It wasn’t until 1960 that she began to paint her monochrome ‘Op’ pieces, in which the systematic progressions of geometric patterns engage the viewer with a disorientating visual experience. Her first solo exhibition was at Gallery One in 1962. She won an International Painting Prize at the Venice Biennale in 1968. After a trip to Egypt in the 1980s Riley began to explore the effects of juxtaposing colours in her works. Riley has had numerous retrospective exhibitions, including Tate, London in 2003. 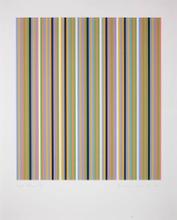