Born in Derby in East Midlands region of England in 1943, Eric Gadsby attended Derby and District College of Art from 1961-1965. Gadsby found success at a young age when he was selected for Bryan Robertson’s seminal 1966 exhibition: The New Generation held at the Whitechapel Gallery and later for Robertson’s 1968 Whitechapel show titled Interim, where he invited each artist from the previous show to select a single work.

The New Generation exhibition series saw the most innovative British artists explode onto the UK art scene; including David Hockney, Bridget Riley, John Hoyland, Phillip King and William Tucker among others. “British art in particular has suddenly woken out of a long provincial doze, is seriously entering international lists and winning prestige for itself” (Bryan Robertson, The New Generation, Whitechapel Gallery, London, 1964). Eric Gadsby’s large scale, bold abstract paintings are oil paint on cotton duck canvas and progress from the constraints of a traditional straight sided stretcher to shaped stretched canvases. The surfaces are painted in thin layers, carefully worked over, creating seamless transitions between colours and giving the impression of 3-dimensionality as well as a having seductive and powerful visual effect.

By the 1980s difficult circumstances had arisen in Gadsby’s life that interfered with further development of his work. Like so many artists of Gadsby’s generation, the lack of arts patronage in Britain limited the success and international recognition that many of these artists deserved in what was an exciting moment in art history. The exhibition shows a selection of paintings from the period 1966-1976 which have not been seen or unwrapped for over 30 years. 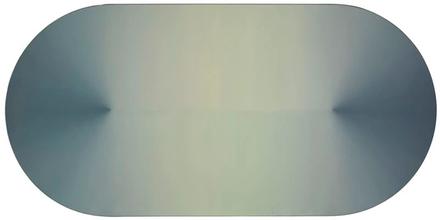