Born in Milan in 1937, Colombo, a leading Kinetic artist, studied at the Brera Academy in Milan from 1956-1959. In 1959 he exhibited at Galleria Azimut, Milan run by Piero Manzoni and Enrico Castellani. Between 1959 and 1960 Colombo founded the experimental group Gruppo T which had close ties with the Nouvelle Tendance group. Colombo’s work demonstrates a strong interest in physics, experimenting with new technology including electrical and magnetic mechanisms as well as neon lights. His first solo exhibition was held at Galleria Pater in Milan in 1960, where he exhibited his kinetic works integrated with light projections. In 1968 he won a prize at the Venice Biennale for his work Elastic Space (1967). In 1985 he became the director of the Brera Academy. 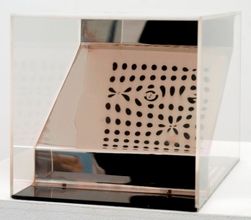