Viennese Actionist painter and performer, Nitsch began his career as a student at the Pedagogical and Experimental Institute for Graphics in Vienna. His performances involve crucifixions, dance, music and other visually violent actions, together with the use of animal carcasses and entrails, in the attempt to create a tragic and sacred-like Gesamtkunstwerk ‘total artwork’: the Orgien Mysterien Theater (or Aktion). First conceived in 1957 but not first realized until 1963 he has performed more than 100 of these. Recent solo exhibitions include the Station Museum of Contemporary Art, Houston (2005) and Museum Moderner Kunst Karnten, Klagenfurt (2012). 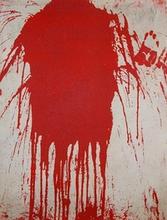