Sheffield born Kenneth Martin studied part time at the Sheffield School of Art from 1927-29, whilst also working as a graphic artist. He continued his studies at the Royal College of Art, London, where he met his wife Mary in 1929. It wasn’t until 1949 that he turned to abstraction, using proportional and mathematical systems, in particular the Fibonacci system. Martin produced Kinetic mobile sculptures, demonstrating a concern with movement and change, until the end of the 1960s when he began a series of large paintings and drawings which looked at the relationship between causality and order. Kenneth & Mary Martin had strong international connections exhibiting in Koncrete Kunst, Zurich in 1960 organised by Swiss artist Max Bill. A retrospective of his work was held at the Tate Gallery, London in 1975. 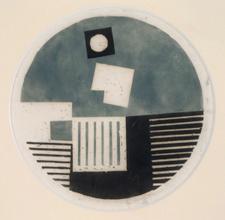