Born in Peking in 1905, Trevelyan went to the Slade School under Henry Tonks. He also studied in Paris under Andre l’Hoste, the Cubist and noted teacher. Trevelyan was associated with an English group of metaphysical painters which included John Nash, Edward Wandsworth and John Armstrong. He painted a few abstracts and a number of Surrealist landscapes, seascapes and interiors. He had his first one-man show at the Lefevre Gallery in 1931. Paul Nash reviewed the show for the Listener and it led him to invite Hillier to join Unit One and exhibit at their first exhibition at the Mayor Gallery in 1933. During the 30s Hillier was in the forefront of the avant-garde and showed in a number of key group exhibitions.

In 1937 he moved to Vence in the South of France, and concentrated on producing, in tempera, startlingly realistic paintings with a Surrealist atmosphere. A critic wrote that his “subtle exploration of stillness and silence saves Hillier’s skill from becoming an end in itself”. His landscapes are often deserted and his still lifes render every detail clear and uncompromising.

He held a number of extremely successful one-man shows at Arthur Tooth and Sons in the 40s and 50s and went on long painting trips to Spain and Portugal.

He was made an R.A. in 1967. He wrote an autobiography called “Leda and the Swan”. He died in Shepton Mallet, Somerset in 1983. The Royal Academy held a retrospective of his work in August of the same year. 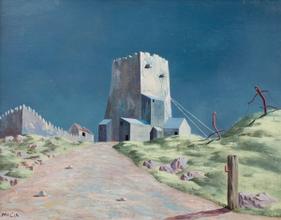