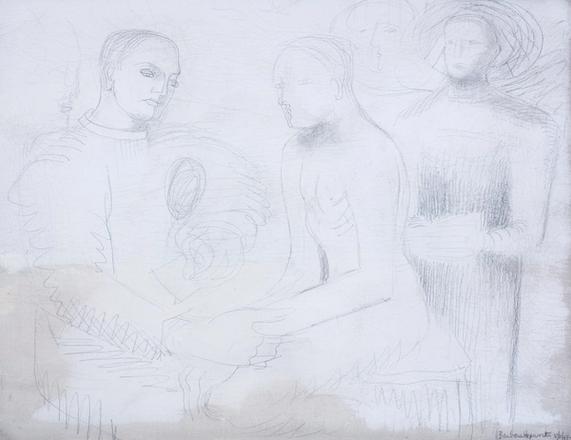 In 1947, encouraged by Orthopaedic surgeon Norman Capener, who had been treating her daughter Sarah for osteomyelitis, Hepworth watched an operation in a hospital which would be a defining moment.

“I expected that I should dislike it; but from the moment when I entered the operating theatre I became completely absorbed by two things; first, the extraordinary beauty of purpose and co-ordination between human beings all dedicated to the saving of life, and the way that unity of idea and purpose dictated a perfection of concentration, movement and gesture, and secondly by the way this special grace (grace of mind and body) induced spontaneous space composition, an articulated and animated kind of abstract sculpture very close to what I had been seeking in my own work….” From Barbara Hepworth, Carvings and Drawings, with an introduction by Herbert Read, London, Lund Humphries & Co Ltd.

Hepworth embarked on a series of drawings from these hospital visits not only at Elizabeth Orthopaedic Hospital in Exeter but later at the National Orthopaedic Hospital and the London Clinic. Drawings depict figures in theatre, surgeons standing in groups or putting on gloves. She also made four drawings of outpatient clinics. She would go on to show a large body of this work in 1948 at the Lefevre gallery in London.

These drawings revived her in interest in anatomy and the harmony of a group working together would influence many of her later carvings "I began to consider a group of separate figures as a single sculptural entity, and I started working on the idea of two or more figures as a unity blended into one carved and rhythmic form.” From Barbara Hepworth, Carvings and Drawings, with an introduction by Herbert Read, London, Lund Humphries & Co Ltd.